One Night At The Penthouse Suite: Cover reveal and excerpt 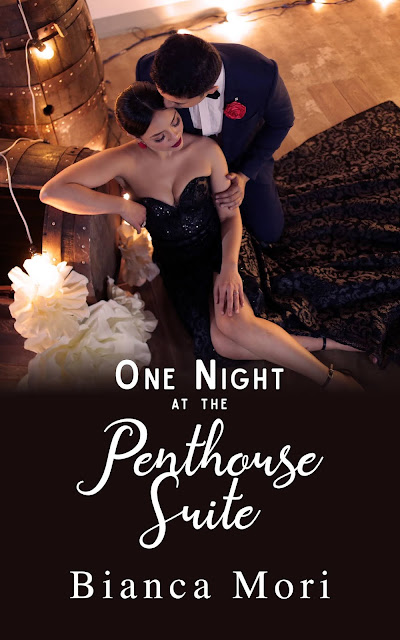 One Night At The Penthouse Suite
Bianca Mori

All her life, Cora Ciacho was trained by her father to be one thing: CEO of Ciacho Group, the company he built from the ground up. She assumes the role six months after he passes away, but must face new challenges: a borderline hostile board, a too-good-to-be-true investment offer, and a mother and sister who deal with their grief in different ways. Thank goodness for Stephen Cruz, the sweet, sexy man who’d rescued her from a party eight months ago and has stayed by her side ever since.

Stephen knows that he and Cora are worlds apart. He does his best even if he wonders if a worker bee like him is enough for the queen that she is. Their relationship sizzles in the bedroom, but as they go through a trial by fire, can his love overcome their challenges? Or will it fizzle as Cora tries to conquer the boardroom?

One Night At The Penthouse Suite is the second book in the One Night series, which feature high society romance tropes, HEA/HFN, and is categorized as Heat Level 3 based on the #romanceclass heat level classification on romanceclassbooks.com.

One Night At The Penthouse Suite is now available for pre-order at Amazon. The book comes on out on November 14, 2020. Get your copy now--click the link to buy. You can find the book in other ebook retailers after November 14.

Excerpt from One Night At The Penthouse Suite

Cora settled on a stool and propped her chin in her hand. “You haven’t eaten?”

“Had some cup noodles, and then I fell asleep watching this.” Stephen nodded to the muted, flickering TV, playing an episode of the show they were marathoning. “Don’t worry, I repeated season one.”

“Good.” She picked up a piece of kimbap and offered it to him. “I wouldn’t want you spoiling me.”

His mouth closed on her thumb, and then he picked up a piece of the rice roll. “Your turn.”

“Wait.” She held her hand up and squared her shoulders. A crease appeared between her eyebrows. Like a summer rainstorm, she was suddenly on the verge of tears. “Stephen, I’m so sorry for earlier today. I feel awful.”

“Hey.” He dropped the kimbap and stood to knead her shoulder. “It’s okay.”

“No it’s not. You took the shift off and didn’t sleep and I couldn’t even enjoy a bubble tea with you—”

She scrambled off the stool and rooted in his mini-fridge until she unearthed the sludgy mess that, a few hours ago, had been her favorite frozen drink. She sipped at it and tried not to look too disappointed.

“You don’t have to drink that. I’ll buy you a new one tomorrow.”

“But I have to. Because you went through all that trouble to get this for me. And because—”

A pang of disappointment bloomed in his chest. “Lunch tomorrow is canceled?”

She nodded, the crease deepening between her eyes. “Elena really wants to hammer through the Carthas Asia expansion and I kind of showed interest so tomorrow we all need to meet with the money guys and—" A deep breath shuddered through her body. Another sip of bubble tea. She tried to sit up straighter. “I shouldn’t bore you with this.”

“Nothing you say could bore me. Come, the chapchae’s getting cold.”

“Let me,” she said, finally abandoning the ruined tea in his sink.

He watched her spoon the noodles into his dish and arrange his utensils. Her prosaic movements reminded him of Ate Nina. His dutiful sister-in-law with her lemon chicken and recycled ice cream take-home containers and tray of Folger’s coffee and solid opinions on who he should date.

“You really don’t need to do that. I’m not a baby,” he blurted out.

The stricken look on her face made him want to kick himself.

“How did you mean it?” Her eyes were soft, but there was a slight compression around her mouth. She was being patient, giving him the benefit of the doubt. But explaining would mean telling her all about Kuya Benedict and Ate Nina’s dire predictions, and she didn’t need to know that his relatives were being dicks.

She also didn’t need to know that the seed of that conversation had taken root inside him like a particularly noxious weed. He kept uprooting it, tossing it over his shoulder into a mental fire, but it kept poking its green head.

You’re supposed to take the lead. Do you really think Cora will be happy with a call center manager?

“I just don’t want to be that guy,” he said, to drown out the thought.

He squirmed under her gaze. “You know. The guy who feels like he has to take the lead all the time. Insecure because his girlfriend is more powerful than he is.”

Her hand, which had been arranging a pair of chopsticks on his plate, stilled and withdrew. “You don’t want to be that guy. But you’ve thought about it.”

“I mean…I know this isn’t easy for you at all, Stephen.”

“Stop.” He waved the air around them as though shooing away a pack of marauding pigeons. “This is all wrong. I misspoke. Forget it.”

She looked doubtful. “But Stephen, if this is how you feel, we need to talk about it.”

“That’s not how I feel.” Another wave of heat overtook him when he realized how harshly he had spoken. Cora’s shoulders had slumped just enough to tell him she was bothered.

He took hold of her hand and gathered himself.

“You’re amazing. I’m the luckiest guy in the world. I want you to know that I want to take care of this.” He pointed to the space between them. “I know it’s precious, what we have. And taking care of this means not becoming the toxic masculinity dinosaur.”

That coaxed a smile through the worry on her face.

“Let’s not fight?” He tried an apologetic grin.

He picked up her hand and kissed it. “There isn’t anything to talk about. I knew what I was getting into. I knew that what we had these past eight months would change as soon as you went full force as CEO, and that is totally okay. I just want to support you until we get through this.”

Her other hand landed on his own, warm and soft. “Thank you.”