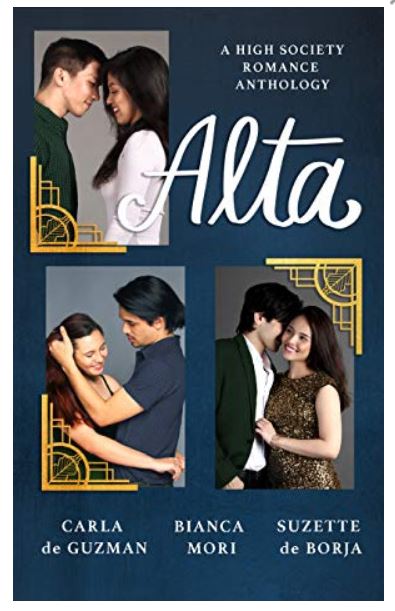 You’re invited to the most awaited party of the century!

Climb up the dizzying altitude of Manila’s high society where the air is never thin enough, the view is always spectacular, if a bit vertigo-inducing, and the summit is crowded with well-heeled elite jostling for the top socialite spot. Scandals, sexy shenanigans, and sizzling romance happen as the filthy rich Aritz family don their diamonds, designer gowns, and bespoke suits and gather to celebrate their matriarch’s ninetieth birthday!

LONGING FOR by CARLA DE GUZMAN
Everyone knows that Allie Medina is in love with Logan Aritz Hilario. With his sexy hair and Aritz nose, it’s a miracle she’s managed to keep her feelings a secret from him every time they cross paths. But her boss, Doña Carmen has had enough of secrets and hatched the perfect plan to throw Allie and Logan together on an all-expenses paid trip to romantic Vienna.

Together in a foreign land and far away from Logan’s family’s influence and wealth, could this be Allie’s chance to finally be on equal footing with the man she’s always thought of as out of her league? And will Logan finally see her for what she’s truly worth?

SAFE PLACES by BIANCA MORI
Heiress-slash-performance artist Natalia Aritz turns up in Manila after a disastrous Italian sojourn, heart too wrung out to even want to leave the house. That is, until a surprising meeting with her college classmate and old friend, Nicky Aventado.

He's asking for a favor she can't refuse. But his connections to her family's past isn't the only reason why she agrees to sneak him into her grandmother's birthday party. There's just something about those lips she can’t resist…

HERE COMES THE ONE by SUZETTE DE BORJA
Intensely private Joaquin Aritz abhors attention. Especially the kind where the Aritz Corporation heir gets a special mention in a video gone viral featuring vlogger and D-list celebrity Kelly Monago. She’s young, brazen, and turns heads wherever she goes, including Joaquin’s.

He thinks giving in to their simmering desire is a bad idea. Kelly is on a mission to convince him they should explore the attraction-and each other-before coming to a conclusion.

***
This 82,000 word anthology has three stories, a prologue and an epilogue with an all new cast of characters. All stories have a happily ever after guaranteed, and is categorized as Heat Level 3 (based on the #romanceclass heat level classification on romanceclassbooks.com).
***

I can't wait for all of you to read ALTA: A High Society Romance Anthology! I had a blast working on this book with my Alta sisters Carla De Guzman and Suzette de Borja; coming up with the ultra rich Aritz family and their whole backstory; and finally, writing Safe Places, featuring artists Natalia Aritz and Nicky Aventado. It's artsy, steamy, cheeky and fun. Pre-order now and get this in your Kindles on October 31! Yay!!!