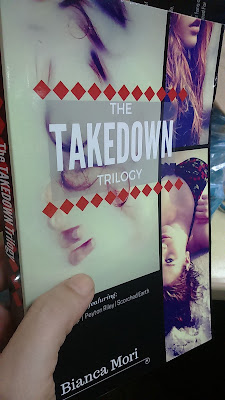 The Takedown Trilogy blog tour ran from August 15 to 21 to spread the word about its independent paperback super edition and wide release in other ebook platforms.

Gette G. aka Pinay Nobelista, asked me this:

What is the best part of being a romance author?
It’s a powerful thing, being able to evoke powerful feelings in people. I guess it’s easier to scare or disgust a person than to make them relive their happiest memories of love — or desire or attraction. Being able to do that, in however small way, is awesome.

Bookbed.org also asked me all about being a writer and the Takedown series in particular, which prompted this gem:

How do you plan out the fight/action scenes in your books? On that note, how about the steamy scenes?
I already know what they’re going to do, in my head, because I see it like I see a movie. But getting it from my head, from a visual place, to paper, is difficult. For me, fighting and, er, f***ing scenes are both action scenes, and the process of writing them is similar. They are both tricky in the sense that they’re both what I like to call ‘verb’ pieces. It’s very easy to fall into a trap with verb pieces to become choppy, like ‘He did this. Then she did this. And then he did this back.’ And that’s a pain to read. The challenge for me is to accurately describe what’s going on, but mimic the tempo and flow of what’s happening with the writing style. So with a fight scene, I could do like a staccato rhythm and try to write around some actions to get that sense of dread and adrenaline going on.

Hahaha huhuhu did I really say 'fighting and f***ing' #facepalm

Alice Kamatis wrote a two-part review of the series!

While reading the second book, I stumbled upon a quote in social media that books talk to you and this one does. I wanted to tell Peyton to swallow your damn pride woman, there's a perfectly good catch you have there and he's in love with you, but of course I couldn't blame Peyton.

And now for the winners!!! One blogger and one reader will each win a signed copy of the Takedown Trilogy paperback.

First, for the reader. This was drawn via Rafflecopter: 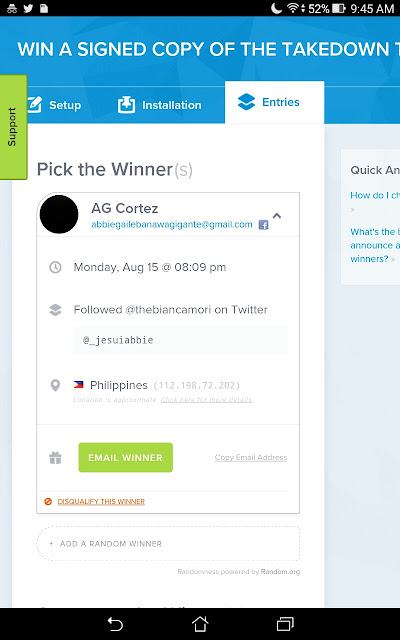 For the blogger winner, I entered the names of the blogs who participated during the tour dates (August 15-21) into Randomizer.org and hit randomize to pick the winner: 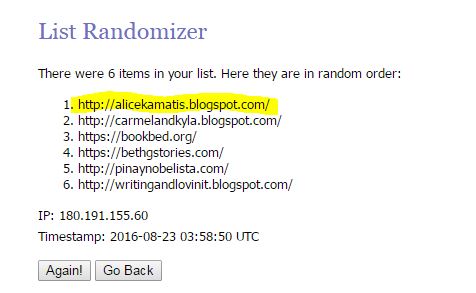 Thank you to everyone who joined the tour and the raffle! If you'd like to get the Takedown Trilogy, you can get the ebooks from here:


You can also order the paperback (Php350+shipping) by emailing thebiancamori@gmail.com.
Posted by Bianca Mori at 9:44 PM 1 comment: 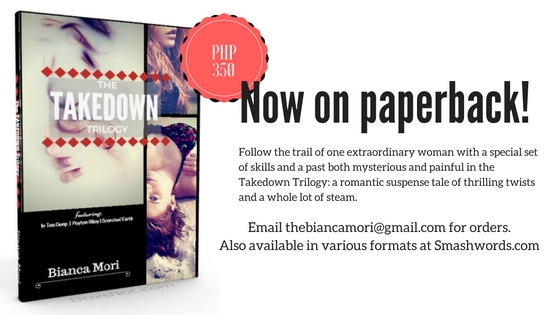 The Takedown Trilogy blog tour happens today August 15 - 21. You can win a signed copy of the paperback - the very first time all three takedown books are available in print - just by joining the blog tour raffle. Join below!


a Rafflecopter giveaway
Posted by Bianca Mori at 1:39 AM 8 comments:

You can win a signed copy of the Takedown paperback by joining the Takedown Trilogy blog tour. One lucky blogger and reader will be picked for this prize. (International bloggers / readers will get the trilogy in their preferred ebook format.) The blog tour will run from August 15-21, so sign up now!

Crime fiction enthusiasts, you can get your fix of independent, local Pinoy crime reads soon at the Craft Central at Greenbelt! I'll be planning another giveaway for this, so stay tuned!